Please join us to help those vulnerable communities whose lives have been impacted by COVID-19. 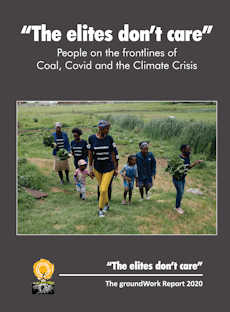 Download the latest groundWork Report - "The Elites don't care" - People on the frontlines of Coal, Covid and the Climate Crisis. 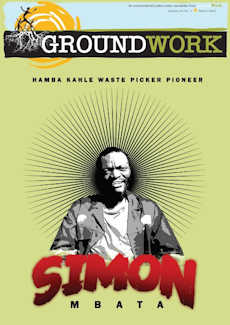 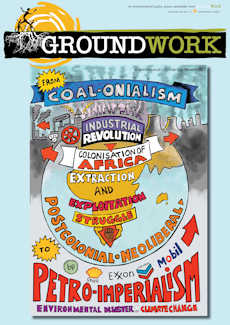 Read the Special Report - "We Know Our Lives Are in Danger": Environment of Fear in South Africa's Mining-Affected Communities 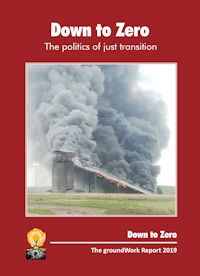 Read the 2019 groundWork report: Down to Zero - the Politics of Just Transition

groundWork is a non-profit environmental justice service and developmental organization working primarily in Southern Africa in the areas of Climate & Energy Justice, Coal, Environmental Health, Global Green and Healthy Hospitals, and Waste. groundWork is the South African member of Health Care Without Harm and Friends of the Earth International.

Virtual Launch of Documentary "Voices from under a Dark Cloud: Towards a Just Transition in the Coalfields of South Africa".

South Africa has initiated the transition to a more sustainable development pathway that involves moving towards a low-carbon economy.  At the same time, South Africa still faces a number of developmental challenges related to poverty, unemployment and inequality, and the climate crisis further threatens vulnerable communities and people. The need for a just transition to a low-carbon economy has emerged as an imperative to ensure the poor and vulnerable are not negatively impacted by the transition and are ideally better off through it.

In Mpumalanga, these challenges are exacerbated by the high reliance on coal-based economic activities, service delivery challenges, and environmental impacts from land, air, and water pollution. These challenges have resulted in poor health, death and destruction to people, the communities, and the environment. Encouragingly, in the transition process, many solutions are beginning to emerge that can help regions like Mpumalanga pivot towards more sustainable industries.

Trade & Industrial Policy Strategies (TIPS), the National Labour and Economic Development Institute (NALEDI), groundWork and Peta Wolpe are engaged as a consortium in a project which aims to facilitate and co-develop a coherent just transition plan for affected communities in Emalahleni and Steve Tshwete in Mpumalanga. In 2021, the consortium produced a documentary to highlight and capture some of the issues, opportunities, and challenges that the affected communities in Mpumalanga face as coal is phased out and we enter a new era. The documentary, entitled “Voices from under a dark cloud – towards a just transition in the coalfields of South Africa”, builds on a series of webinars and local engagements held over the last 18 months to provide a platform for affected communities to have their voices heard.

To see the full programme for the event which takes place from 15h00 to 17h00 on 21 June 2022 and to register to join this event please click here. 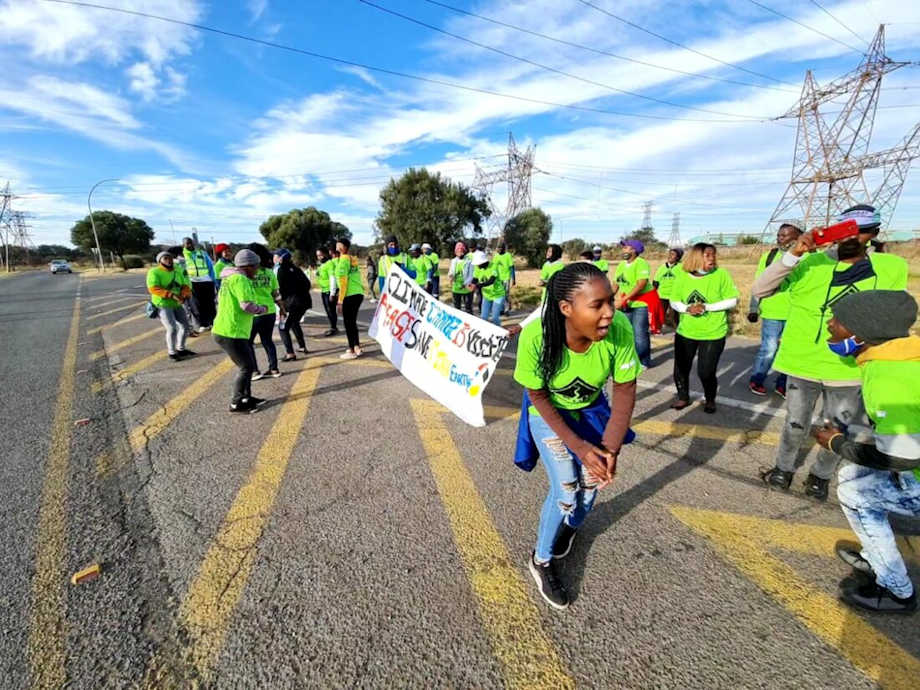 Long suffering communities of Sharpeville and Bophelong have gathered outside ArcelorMittal South Africa Ltd’s (AMSA’s) main plant in Vanderbijlpark to protest against ongoing pollution, non-compliance, failure to engage meaningfully with fenceline communities and unclear plans to decarbonise its operations.

The protest follows AMSA’s annual shareholders meeting held on 19th May 2022, community groups were refused permission to protest at the time of the AGM due to the 2-week long AMSA worker strike led by the National Union of Metal Workers of South Africa (NUMSA) over inadequate wages.  Despite AMSA’s revenue being two-thirds higher than in 2020, it reduced its environmental spend from R151 million to R64 million in the last financial year. This is a worrying trend given AMSA’s history of pollution and environmental non-compliance.

Shareholder activists from VEJA (Vaal Environmental Justice Alliance), groundWork and the Centre for Environmental Rights attended the AGM to ask questions related to AMSA’s ongoing environmental non-compliance, including soil and water contamination as well as air pollution; lack of meaningful community engagement; and its insufficient and opaque climate commitments.  The AGM was held on a virtual platform and shareholders were limited to asking written questions with no opportunity for follow up on the vague and dismissive answers provided by the outgoing chairman of the board, Mpho Makwana.

Climate change, and the Climate Change Bill, will profoundly impact all corners of society and the economy, and it is important that all voices are heard in the shaping of this critically important law – especially the voices of youth and of women who are particularly exposed to the impacts of climate change.

On 27 May 2022, the CER, on behalf of the Life After Coal Campaign, addressed a written submission on the Climate Change Bill to the Parliamentary Portfolio Committee on Environment, Forestry and Fisheries. The committee had issued a call for public comments on the Bill in April, an invitation that appears to have been taken up by a multitude of civil society role players and individuals, both within the climate justice space and beyond.

The CER submission addresses various fundamental concerns about the Bill, including its lack of clear and meaningful emissions reduction targets, an overall lack of urgency and a failure to adequately ensure that all of the necessary organs of state are empowered and adequately mandated to play their roles in the necessary climate change response measures envisaged. The Bill also fails put in place a clear, strong, and enforceable mechanism to compel emissions reduction. The Bill ultimately needs to protect a number of important Constitutional rights which will be infringed if South Africa’s climate response is inadequate.

The committee now has the discretion to call for public hearings, a next step that CER and others are strongly calling for.

“A strong, clear and effective Climate Change Act will go a long way to achieving one of its primary stated goals: ensuring a just transition to a resilient, low carbon economy and society. The Bill as it currently stands does not do this, and we urge the committee to address our concerns and make the necessary amendments,” says CER climate advocacy lawyer, Brandon Abdinor.

Hell has no fury like the Fuleni community members who are opposing coal mines. On 15th May 2022, the Mfolozi Community Environmental Justice Organisation (MCEJO) again sent packing another mining company, Imvukuzane (Pty) Ltd, during a community meeting in Ocilwane, one of the six villages in Fuleni.

Imvukuzane had come to give a presentation about their project to the Fuleni community and traditional council, and to apologise for having displayed mining notices in the Fuleni villages in April 2022 – without first having obtained permission from the local leadership. The notices instilled fear but also infuriated community members, who suspected that the mine was being disrespectful to local people. Imvukuzane was aiming to apologise to each village and each of the indunas.

Today we celebrate Africa Day.  A day where Africa’s strength and connection to the world is considered.  But the world in which Africa operates is not just.  At a time where we need to consider the past inhumanity of colonialism and neo-colonialism, and forge a united future where we can all live in solidarity and equity with each other the opposite is in motion.

This past weekend, Durban my hometown on the east coast of South Africa was besieged by flooding for the second time in two months. The April 2022 floods resulted in the deaths of 443 people and even today, 22nd May, more than fifty people are missing. Families have given up hope of finding their loved ones.

The floods touched us not only as activists, but also in our personal lives as many of us experienced what our fellow Africans experience now close to an annual reality of flooding and lost loved ones.  Friends in Mozambique, Madagascar, Zimbabwe, Malawi and the other parts of this planet called home, we now understand your pain and suffering.

To begin reflection on African Day within the context of solidarity and climate justice, let us reflect on recent global events, especially those emerging out of Europe that undermines any promises of solidarity and any hope of a just transition. The brutality and overtness of colonialism and neo-colonialism has been replaced by sophistication and stealth.

This latest challenge to proposed gas-to-power projects in Richards Bay comes after the Minister of Forestry, Fisheries and Environment dismissed groundWork’s appeal against the decision to grant environmental authorisation for the Phinda Power project in November 2021.

The call for review by groundWork and SDCEA argues that the original environmental impact assessment (EIA) failed to consider all feasible and reasonable alternatives and that the Minister’s reliance on the inclusion of gas power in the Integrated Resource Plan 2019 (IRP 2019) does not exclude the consideration of alternatives, as required under NEMA and EIA regulations.

This is the third judicial review application brought by groundWork and SDCEA against the Minister’s decision to uphold environmental authorisations for proposed gas to power projects.

On 11 May 2022, the groups also launched legal proceedings to set aside an amendment to the environmental approval for another gas to power plant, RB2, in Richards Bay. 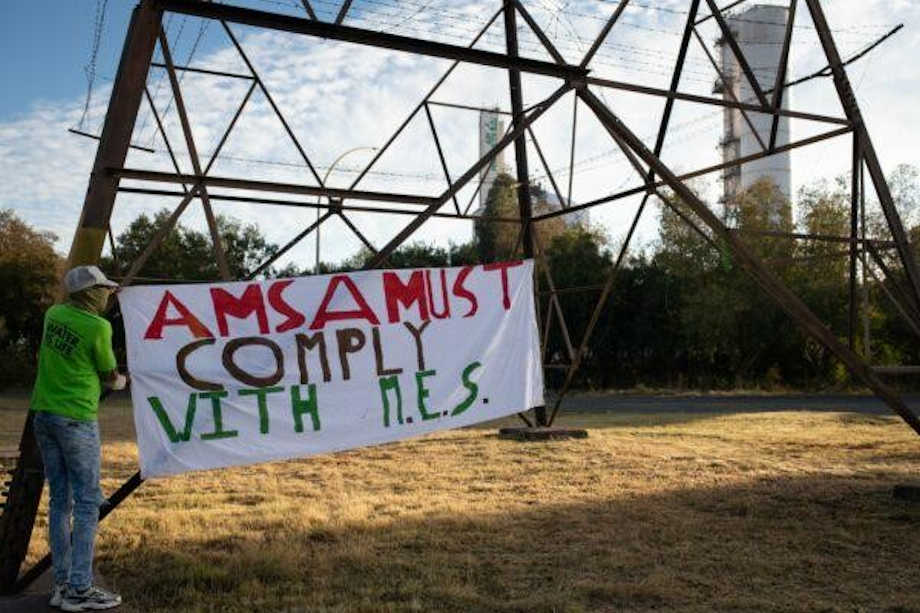 ArcelorMittal South Africa Ltd (AMSA) remains South Africa’sthird worst greenhouse gas emitter, responsible for about 3% of the country’s emissions. The steelmaker has a long history of toxic air pollution, land and water contamination and a dismal record of engagement with communities and workers affected by the company’s violations. VEJA representing communities in the Vaal with support from the Centre for Environmental Rights (CER) will pose questions to the AMSA board and management during the company’s 2022 annual general meeting (AGM) on Thursday 19th May 2022.

While environmental justice groups recognise the publication of AMSA’s first Environmental, Social and Governance (ESG) report as being an important step forward, the report fails to provide sufficient detail on its ability to meaningfully realise key commitments. In particular, the steelmaker’s plans to reduce greenhouse gas emissions by 25% by 2030 and to reach net-zero by 2050 are simply too vague.

For earlier news and our news archives click here, or here to access our collection of media items.

Please join us to help those vulnerable communities whose lives have been impacted by COVID-19.

Download the latest groundWork Report - "The Elites don't care" - People on the frontlines of Coal, Covid and the Climate Crisis.

Read the Special Report - "We Know Our Lives Are in Danger": Environment of Fear in South Africa's Mining-Affected Communities

Read the 2019 groundWork report: Down to Zero - the Politics of Just Transition